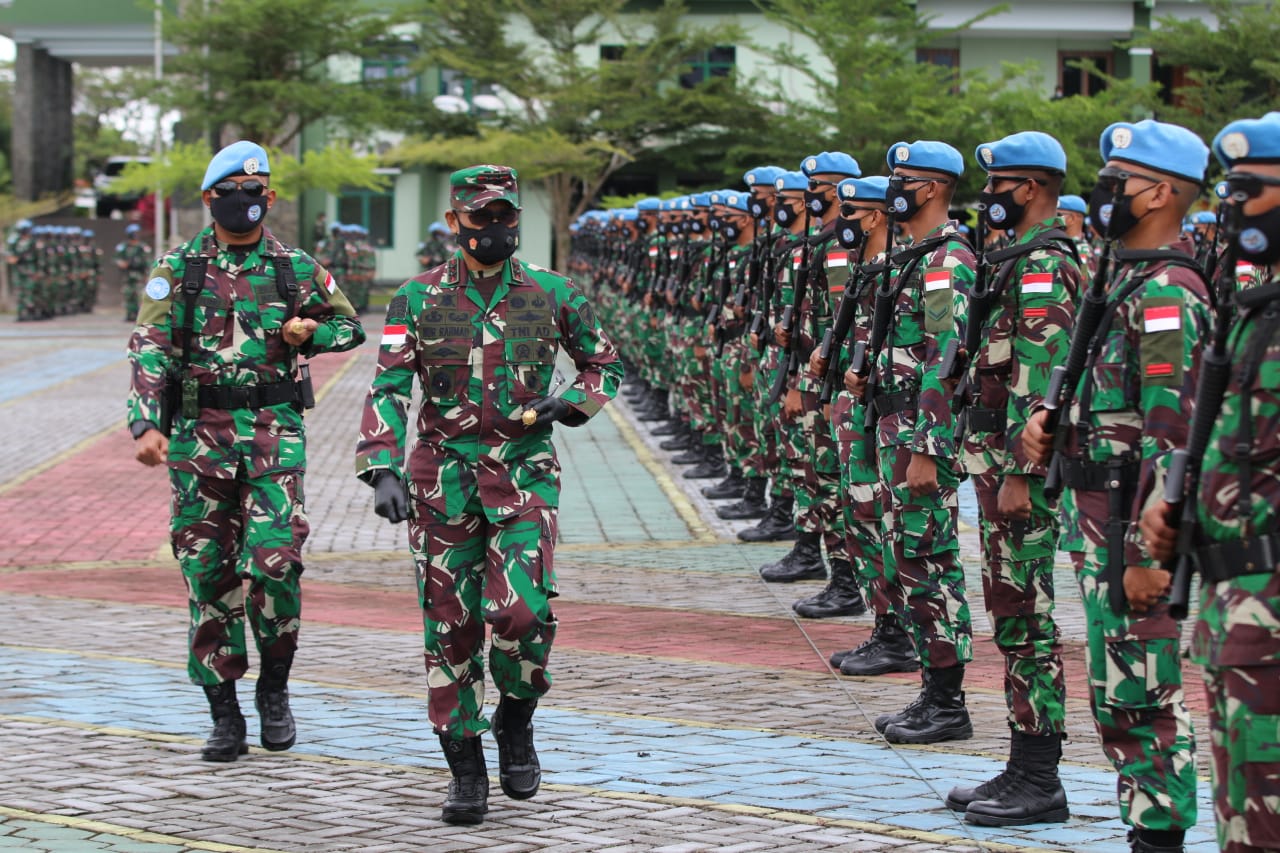 Pangdam XII / TPR Sends Task Force for BGC TNI Konga XXXIX-C MONUCO Congo
Ginewstvinvestigasi.com
Kubu Raya - Commander of Kodam XII / Tanjungpura, Maj. Gen. Muhammad Nur Rahmad officially releases the Fast Action Battalion Task Force (BGC) TNI Garuda Contingent XXXIX-C MONUSCO Congo Infantry Battalion Special 644 / Walet Sakti at Makodam XII /  Tpr, Sunday (3/01/2021).  For one year this task force will be the UN peacekeeping force in the Democratic Republic of Congo.
On this occasion, Maj. Gen. Muhammad Nur Rahmad dispatched 488 Task Force personnel led by Lieutenant Colonel Inf Arisunu to carry out a world peace mission under the auspices of the United Nations.  The Pangdam XII / Tpr along with the Main Officials of Kodam XII / Tpr congratulated the BGC Task Force Garuda Contingent Garuda XXXIX-C MONUSCO Congo Infantry Battalion Special 644 / Walet Sakti.
Pangdam XII / Tpr, Maj. Gen. Muhammad Nur Rahmad when giving a statement explained, the departure of Yonif RK 644 / Wls was motivated by the achievements that had been made by the unit in the previous assignment.
In 2018 this battalion was assigned to the Kodam XVII / Cenderawasih area of ​​Papua Province in Keerom Regency.  As long as the assignment of the unit succeeds in carrying out guidance to the community, there are no violations and all of them return safe.
"As a token of appreciation from the leadership of the TNI, this battalion has the opportunity to carry out operational tasks in the UN mission to maintain world peace in the country of Congo," explained the Pangdam.
Furthermore, General Bintang Dua, Abituren Akmil 1988, also explained that the Task Force personnel will carry out operational tasks for one year.  From Indonesia, as many as 850 personnel will be dispatched, a combination of the Indonesian Army, Navy and Air Force.
"Of course we hope that this battalion will be given success in carrying out its mission as world peacekeeping forces under the United Nations," hoped the former Aspam Kasad.
Maj. Gen. Muhammad Nur Rahmad hopes that in connection with the ongoing Covid-19 pandemic, soldiers will always exercise discipline in enforcing health protocols.
"One of the efforts we also provided was with manuals, pamphlets and brochures on guidelines for behavior change. Apart from protecting soldiers, this can also be a means of assigning them to enforcing health protocols in operational areas," concluded Maj. Gen.  Mansour)
(Pendam XII / Tpr)
Bagikan berita ini ke yang lain