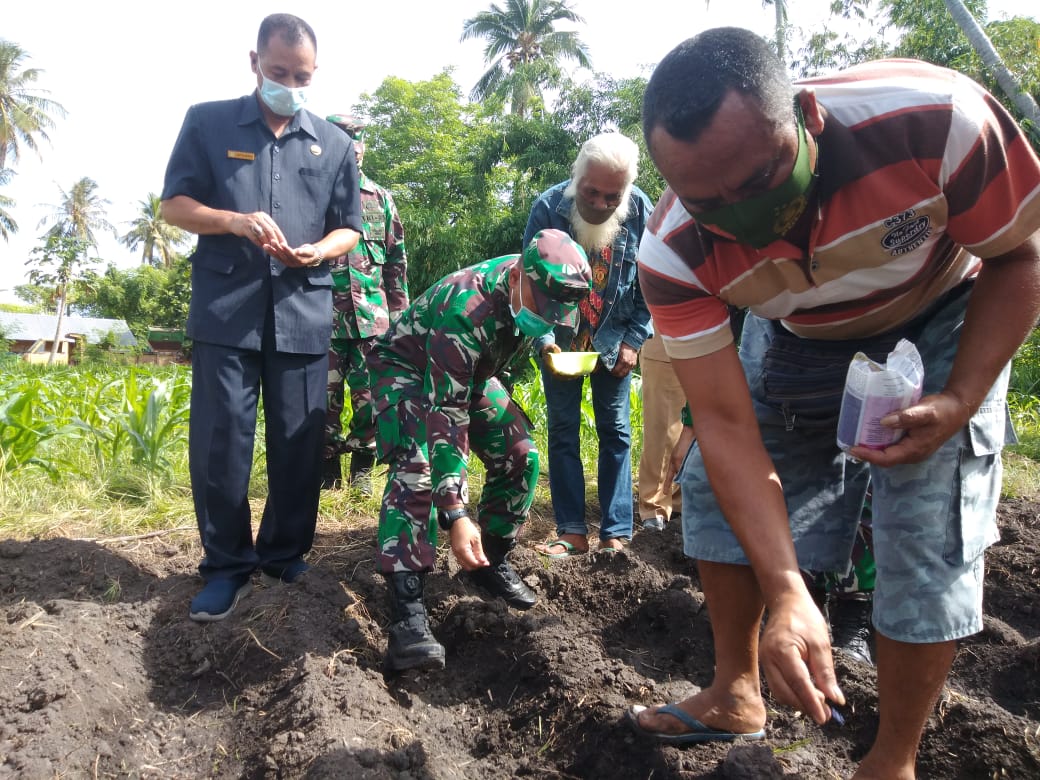 Dandim 1601 / ST First Planted Corn in Kambera
East Sumba - GlobalInvestigasinews.Com
Tuesday, January 5, 2021 at 8:35 a.m. at Mauhau Village, Kambera District, East Sumba Regency, the Prime Koramil 1601-05 / WGP Corn Plant Superior Program with the Lima Prosperous Farmer Group was attended by the Kodim Commander 1601 / ST
Present at the event were the Commander of Kodim 1601 / ST and Ramil 1601-05 for Waingapu City, Head of Agriculture Office for East Sumba Regency, Head of Kambera Sub-District,
Para Babinsa Ramil 1601-05 Kota Waingapu, Head of BPP Lambanapu and Penyulu, Babinkamtibmas of Mauhau Village, Head of Mauhau Village, Chairman of the Five Prosperous Farmer Group Jhon Lukas Ludji, Member of the Lima Sejahtera Farmer Group
Explanation Commander of Kodim 1601 / ST Lieutenant Colonel Czi Dr. Dwijoko Siswanto, SE.M.I.Pol explained the objectives of the Government and the TNI which are essentially planting corn to harvest cattle.
The government has a program of - + 550-3000 hectares so that the TNI collaborates with the Government and us TNI-AD through Babinsa to help farmers boost Community activities to cultivate existing land.
Let us support the government in the success of the program planned in 2021. We will help as much as we can, both processing to development and enlargement.
There are many opportunities that we will take in the future, both for agriculture, tourism and animal husbandry.  The TNI's hope is that "the government creates progress for the people and specifically the people of East Sumba," said the Dandim
The Head of Kambera Sub-district thanks the TNI for raising the spirit of the people in the agricultural sector once again on behalf of the Government, we thank the TNI. We, the government, have very little funds due to the influence of the Covid-19 epidemic situation.
"This time our existing funds will boost agriculture, not neglect infrastructure. And we thank Babinsa for always," he said.
Meanwhile in the same place the Head of the Agriculture Office said that let us pick up the program from the Government and we are accompanied by the Army, so we hope we will be even more enthusiastic.  And the government will help corn farmers for future corn marketing.
Let's take the potential that exists in the agricultural sector so that we don't export from outside of the island of Sumba. Regarding grasshopper pests and flyworms, the Agriculture Office will carry out pest control and in the future we will form a Pest Control Team in each village and we will help poison pests.
In the future, fertilizer will be monitored more closely so that it is right on target for the betterment of farmers.  We will also ask for TNI assistance in the future there will be order to control Alsintan and form a new management for equitable progress.  "In the future, an integrated agricultural pattern will be implemented in order to reduce stunting in East Sumbawa Regency," said the Kadis
The Head of Mauhau Urban Village continued to thank Mr. Dandim 1601 / ST and ladies and gentlemen who attended us on behalf of the people of Mauhau Village and especially the Liman Sejahtera Farmer Group.
"Whatever the Government's future program, our special community in Mauhau Village, we are ready to help the success and prosperity of the community itself. And we expect assistance from Babinsa and Babin Kamtibmas," he said.
** Mus-Global **
Bagikan berita ini ke yang lain