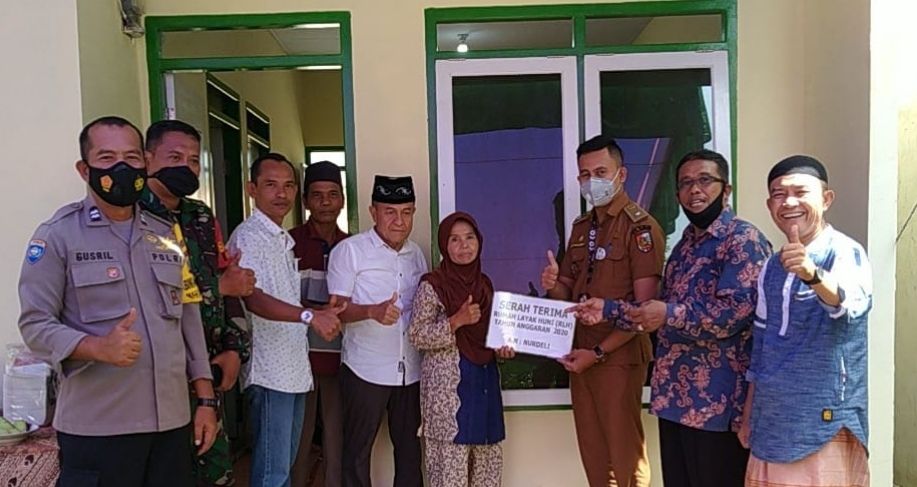 Babinsa Maharatu Village and Bhabinkamtibmas Accompany the Head of the Village in the Handover of the RLH House
Pekanbaru - GlobalInvestigationNews.com
With the situation and economic conditions of the community during the Covid 19 pandemic, the government through the PUPR (Spatial Planning) Office of Pekanbaru City is again providing assistance in the form of a house renovation program for residents who have houses that are unfit for habitation.
On this occasion Serda Adi Tia as Babinsa Kelurahan Maharatu Koramil 05 / Sail Kodim 0301 / Pbr who was also accompanied by Bhabinkamtibmas Aiptu Gusril accompanied the village head in handing over keys to residents who received livable housing assistance (RLH) Monday (4/1/2021),
Serda Adi Tia said, "The activities we are currently participating in are government programs supported by the Pekanbaru city public works department through the Maharatu Village as an extension of the City government who understands the situation in the respective Kelurahan areas, both underprivileged citizens and residents.  who owns a house is not suitable to live in ".
While I am Babinsa and also Bhabinkamtibmas as government officials who are stationed in each kelurahan, apart from guarding and monitoring the situation in the target area, we also monitor assistance from the city government in the implementation of channeling funds to underprivileged residents.
"And also as at this time we have participated in assisting the urban village from the initial process of building the RLH (Habitable House) housing to the handover of keys by the Kelurahan, so that we can continue to supervise the assistance from the beginning until the process of handing over the assistance is complete," he concluded  . (S.lbs)
Bagikan berita ini ke yang lain